January 05, 2016
One of the most exciting new trends in consumer electronics is taking a page out of a mobile industry playbook: indoor location technologies.

What does this have to do with consumer electronics?

The 2016 Consumer Electronics Show (CES) includes several innovative consumer electronics devices that use indoor location positioning technology to deliver incredible functionality to their users. Many of them are doing so using innovative chip-based indoor location technologies, delivering better accuracy than is available on mobile. As the products you can see at CES reach market, the new trend of location-aware electronics can transform how people use electronic devices, as surely as GPS has transformed mobile apps.

Skye Electronics, a Chinese start-up company, has developed a drone that will follow you as you move around and video you from the air. Their product includes tracking device armbands that are worn by the user being videoed, and which are followed by the drone. Rather than using GPS, which would limit their product to outdoor use and would introduce tracking errors of several meters, Skye Electronics uses indoor location technology to track the armbands precisely, anywhere. 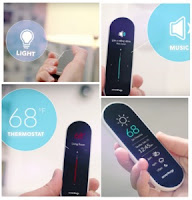 Paris-based SevenHugs has developed a radically different kind of universal remote control. Everyone knows about universal remote controls, right? Lots of buttons that let you select which device you’re controlling? Wrong. SevenHugs’ neweset product lets you point the remote at whatever you want to control, and figures out by itself what you want to control, using indoor location technologies. The remote determines its own location, the location of the controllable things in the vicinity, and the orientation and direction in which it is being pointed, and can easily determine what to do based on how the remote is held. It even changes its display screen to fit the controls of the device being controlled. You can see the SevenHugs remote at CES in the Eureka Park at Sands Expo.

If you play sports, and want to do more than have a drone capture your video, ShotTracker might interest you. ShotTracker tracks all the action on a basketball court. Not only are the players tracked as they move around the court, but the ball itself is also tracked, so that coaches and players can see exactly what happened post-game. ShotTracker developed a ball with an integrated UWB chip in collaboration with Spalding, to ensure the highest quality with added location tracking technology. Their highly accurate location positioning is handled by chips from Dublin-based DecaWave. You can see the newest ShotTracker system in action at CES in the Fitness & Technology area. 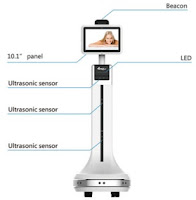 A shopper assistant robot, from a Taiwanese company called XYZ Robot, moves around a store with customers, offering assistance and pushing their cart. The robot’s indoor location technology enables it to find its way around the store and also to stay alongside the customer. Their shopper assistant guides you to products on your shopping list, pushes your cart and offers you promotions. By delivering this indoor location functionality in a robot instead of a mobile app, Kinpo enables their device to achieve much more accurate indoor location positioning than can be achieved by smartphone apps.

There are more location-aware electronics to be seen at CES, and even more reaching market from innovative companies worldwide. One notable location-aware product not at CES is the robot camera from France-based Move ‘n See, which uses indoor location tracking to take videos of people as they move around a site.

All of these location-aware electronic products, and others, use indoor location positioning technology to incorporate location positioning into their products. This report analyzes indoor location solutions available in chip form, for incorporation into electronic devices such as those above. DecaWave, mentioned above, is one of the leaders in bringing chip-based location technologies to market, but there are many others with very strong technology as well.

March 01, 2021
Acquisitions Continue in the Indoor Location Industry; Grizzly Analytics Shows Price Growth at the High End and Continuity at the Low End New York, NY, February 22, 2021 - Despite the recent pandemic, M&A deals in the indoor location area have maintained a steady pace of 4-5 deals a year. At the high end of the spectrum, prices have increased to up to $400 Million for the highest priced recent deal and $165 Million for the second highest. At the lower end, many earlier stage companies have been acquired in the $2-3 Million range. A newly updated report from Grizzly Analytics gives prices and strategic details for 33 acquisitions in the indoor location area.  While the highest priced indoor location acquisitions have historically involved chip-based technologies, recent acquisitions have been more varied. “A few years ago the focus of indoor location M&A was all around pure localization technologies. The biggest deal to date is in fact for a chip-based localization technolog
Read more

May 18, 2011
Welcome to the Grizzly Analytics blog! Our subscribers get a monthly in-depth trend analysis report, a weekly Monday Morning Update e-mail giving perspectives on the week's events, and a once-a-month phone call with a Grizzly Analytics analyst. We also sell special reports analyzing individual trends in-depth. What kinds of trends do we look at?  They're things you've never seen, but will soon: Location-based song playlists, indoor positioning (where today's GPS doesn't work), flexible and stretchable cellphones made with NanoTechnology, apps that run on simple phones (not smartphones), NFC-equipped phones that read information from tags in stores, and much more. Here are just a few things we expect to see happening soon: RIM will launch its e-mail messenger service on other companies phones. Google will buy biNu or another company in simple-phone applications. Nokia will launch a business-user phone with a built-in pico-projector. Check back on thi
Read more
The Grizzly Analytics flagship report on Indoor Location Positioning Technology has been purchased by virtually all the top mobile-related technology companies worldwide. The report was fully updated Jan 11, 2017. The report identifies the trends, explains the technologies, and analyzes R&D from almost 200 major companies and start-ups.