October 25, 2012
Most indoor location positioning systems rely on Wi-Fi signals - they look at the set of Wi-Fi hotspots that are in range of the phone, and how strong the signals are for each one, and use a database of hotspot locations or a collection of "signal strength fingerprints" to estimate the phone's current location.  This is how must indoor location systems on the market work, including Google's.

But here's the rub: iPhone's iOS doesn't let apps have the Wi-Fi signal strength data.  Many people have speculated why, and I suspect the reason is that they want to keep indoor positioning all to themselves. It's unfortunate, because Apple of all people should know that they win a lot by supporting 3rd-party developers on iOS. But that's how it is.

Two weeks ago we reported the first deployment of a new approach to indoor location, by SenionLab, using sensors in the phone (gyroscope, compass, accelerometer, ...) to detect phone movements and track location step by step.   This approach is called "sensor fusion," a.k.a. "inertial navigation."  Sensor fusion has been in research for years, and we've tracked start-ups bringing it to market.  Now it's here.

Most importantly, sensor fusion technology can in principle run on the iPhone.  But good sensor fusion needs some radio signals as well, to keep the motion sensing from going off track.  The deployment two weeks ago ran (so far) only on Android, combining sensor fusion with Wi-Fi signals, and not on iPhone. 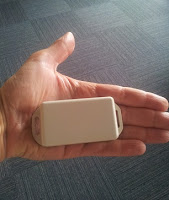 Enter Pole Star, a French company with a U.S. headquarters in Palo Alto.  They started out with Wi-Fi based indoor location technology, and have now added sensor fusion along with Bluetooth signal processing.  Their combined approach has now had several deployments announced in France (see press releases 1, 2). Best of all, their system runs on iPhones.

On both iPhone and Android, a much smoother and more accurate location positioning is delivered by the use of sensor fusion, than can be delivered using Wi-Fi or Bluetooth signals alone.

Grizzly Analytics predicts that sensor fusion will spread, in more apps like these from Pole Star and SenionLab.  We're tracking several other start-ups working on sensor fusion, along with many major mobile and chip companies.  Soon we'll see more start-up companies in this area being acquired, by either mobile OS makers, social network companies or chip makers, and then sensor fusion will be even more central to mobile infrastructure.

We look forward to seeing more and more sensor fusion, and other novel approaches, coming to market and bringing location services indoors!

Want to understand indoor location positioning technology, both on the market and in research at major mobile companies?  The Grizzly Analytics report on indoor location positioning technology analyzes research by Google, Microsoft, Apple, Samsung, Qualcomm, Cisco, Sony Ericsson, Motorola, CSR, Broadcom, STMicroElectronics, and many more, along with systems from over 30 start-up companies.