November 08, 2012
Start-up company Meridian has just announced that its indoor location technology will power a new mobile application for Macy's flagship store in Herald Square, New York City.  The new Macy's app will show users a familiar "blue dot" on a store map as they move around, and will help them navigate to the products they're looking for.  Meridian also announced that their technology will be used in new indoor navigation apps for Miami Children's Hospital and the Sydney, Australia airport. Their technology is already in use at the American Museum of Natural History. 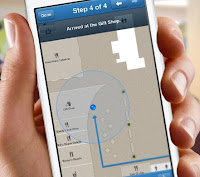 But what makes Meridian different from most other indoor location technology providers?

The answer is that Meridian's core location technology runs on the network, not on the phones.

Most indoor location technology, such as that of SenionLab and Pole Star (both of which we've written about recently), runs on the phones, and each phone tracks its own location as it moves around the site.

With Meridian's technology, the network tracks the phones as they move around the site.  Apps running on the phones can get their updated location just be asking the server, and can feed appropriate content and notifications to the user.

What's the difference? First, it means that their systems can run on any phones with Wi-Fi, including iPhones, whereas a lot of other indoor location systems don't run on iPhones. Second, it means that user movement data is easily available to site managers for analysis. Third, it makes Meridian's technology easier to port to new operating systems. Fourth, it means that each phone has less work to do, and can spend more cycles doing other things that phone users want to do.

Of course, there are also advantages of location positioning running on phones. No one approach is a clear winner at this point.  But the key is to understand the different approaches, such as Meridian's network-centric approach, and how each approach compares to the others.  See the Grizzly Analytics comprehensive report on indoor location technology for details on research at all the major technology companies and over thirty start-ups.

Meridian's approach is oriented particularly towards sites that have high-end Wi-Fi networks from companies like Cisco.  They're positioned well for top-tier clients like the ones listed above.

As Grizzly Analytics has been saying for over a year, indoor location is poised to transform how we use our smartphones to get around. We all love GPS outdoors, and the same power and ease-of-use is now coming indoors.