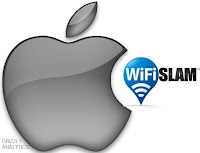 News broke in the Wall Street journal blogs on Saturday that Apple has acquired WiFiSLAM, reportedly for around $20 million.  This is one of the first major acquisitions in an area that's poised to explode in 2013.

The Grizzly Analytics 268-page report on indoor location positioning technology profiles both Apple and WiFiSLAM, and predicts that Apple will make an acquisition in the area.  Here are a few reasons that their acquisition of WiFiSLAM makes a lot of sense.

Apple has for years been preventing indoor location apps from running on iOS.  They've done this by withholding Wi-Fi received signal strength indicator (RSSI) data from apps.  This is the data that most Wi-Fi-based indoor location systems use to analyze nearby Wi-Fi access points and calculate their location.  We're written before (here) about this problem and how some companies are getting around it. But the biggest question has always been why Apple was doing this. They're the pioneers in enabling third-party apps. Our speculation has always been that Apple had plans in the works for indoor location.

WiFiSLAM is one of over 50 start-up companies working in the area of indoor location. Many of these companies, WiFiSLAM included, started with Wi-Fi signal fingerprinting, and expanded to incorporate sensor fusion (a.k.a. inertial navigation) and map constraints.

WiFiSLAM is distinguished from the others, however, in two very important areas.  First, they have demonstrated motion sensing by sensor fusion (inertial navigation) that works solo, without any other technologies integrated. Most other sensor fusion systems have bee forced to add other technologies, to avoid small errors in sensor fusion building up over time.  This technology isn't yet on the market, likely because it only works this well under certain conditions, but nonetheless it's a very strong achievement. 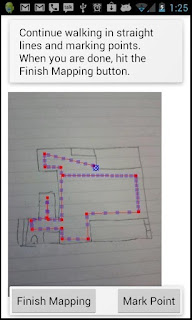 WiFiSLAM's second distinction is even more novel. They have released a mobile app that enables any smartphone user to take a picture of a map of their indoor site, walk around the site a few times, and have that site work within WiFiSLAM's location positioning system.  This app enables much easier crowd-sourcing of indoor maps than Google or others have, and would enable iPhone indoor positioning to spread like wildfire as iPhone fanboys jump to upload their site maps.

All in all, Apple's acqusition of WiFiSLAM looks like a real win for Apple and for the market. Hopefully Apple will incorporate their technology into iOS in a way that will enable 3rd-party indoor apps to work on iPhones and not only on Android.

Apple also has a unique way of legitimizing technologies and leading a wave of activity in new areas. Who will be the next indoor location companies to be acquired? Grizzly Analytics predicts that companies with strong sensor fusion technology will be prime targets of major mobile companies (SenionLab and Loctronix are two examples out of many). We also predict that mobile commerce companies, like EBay (PayPal), Amazon or local.com, will acquire indoor location companies focused on retail (PointInside and Aisle411 are two examples out of many).

Whatever the future holds, the indoor location area is heating up!


Want to learn more about the indoor location positioning area? Check out the extensive 268-page Grizzly Analytics report on the area, profiling over 50 start-ups as well as research by major mobile, chip and network companies.