October 31, 2013
Virtually all R&D in indoor location positioning falls into a few categories. Many systems determine location based on Wi-Fi signals, either using fingerprinting or using triangulation. Many are using sensor fusion (also called inertial navigation), tracking location movements using device sensors. And an increasing number are using Bluetooth Low Energy beacons, where devices track their locations based on signals from dedicated beacons that are deployed around sites, again using either fingerprinting or triangulation. With over 50 start-up companies in our comprehensive report on indoor location technology, and more starting-up every week, virtually all are using one or more of these approaches.

Enter DecaWave, a fabless semiconductor company developing indoor location positioning based on 802.15.4a-standard UWB (ultra-wide band) wireless technology. DecaWave's solution is hardware-based, so it's not something you can download to your phone today. Their chip is going to be launched in the market very soon.  With 10-15cm accuracy, it will bring a new level of location positioning to industrial applications, and is poised to reach mobile devices soon.

Most significantly from a technology perspective, DecaWave's solution implements a wireless technology that's designed from the bottom up, at the wireless wavelength and encoding level, to support location positioning.

802.15.4a is a wireless standard for peer-to-peer personal-area networks (PANs), running over ultra-wideband (UWB), which are wireless networks with a range of between 40 meters (in dense environments) and 300 meters (line-of-sight). 802.15.4a was designed specifically to include distance ranging, determining the precise distance that a radio signal has crossed, as a means of handling interference and reflections. DecaWave is about to be the first company to bring a chip to market that implements location ranging on top of 802.15.4a.

UWB radio, as implemented in 802.15.4a, has several inherent advantages over narrowband radio (including bluetooth and Wi-Fi) in its use for calculating location by time-difference of arrival (TDOA) or time-of-arrival (TOA) measurements. First, the transmission bursts of wideband radio are shorter, so their starts and stops can be measured more precisely. But more importantly, in real-world settings, where signals have interference, reflections, refractions, and often don't have line-of-sight, UWB signals will be more readable in the presence of distortions. This graph shows one example, when a reflected signal (shown in red) is received shortly after a primary signal (blue) is received.

This means that UWB signals are more likely to be received reliably when there are real-world distortions in signal reception. This is one of several ways in which 802.15.4a is designed for positioning. DecaWave's solution is not only highly accurate, but it reportedly delivers that accuracy 99.7% of the time, instead of the 80-90% reliability of many other systems.

It's interesting to note that even Cisco, one of the biggest proponents of Wi-Fi, has acknowledged that 802.15.4a is better than Wi-Fi for location positioning. In this patent application, a Cisco Principal Engineer wrote that "the existing waveforms... for... 802.11 communication protocols do not allow for highly accurate or easily calculated TOA or TDOA location computations... There are other types of waveforms that are better suited... Chirp Spread Spectrum (CSS) waveforms are known to be advantageous for TOA or TDOA... such as is defined as part of the IEEE 802.15.4a communications protocol." 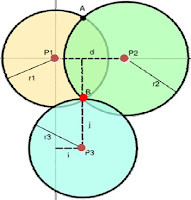 In industrial settings, DecaWave's technology is typically deployed in receivers and tags. Receivers are radio beacons, at fixed locations, similar to Wi-Fi hotspots or cellphone antennas, that receive signals from tags and calculate the tags' locations. The tags are small devices that are attached to things that will be tracked. In hospitals, the tags might be attached to patient wristbands or to portable critical-care medical equipment. In office settings, tags might be attached to employee keycards, to office equipment like projectors, or to mail carts.

Once a DecaWave receiver is deployed, it can measure the precise distance between itself and each of thousands of tags that are in its vicinity.
Each of these distance measurements is accurate to 5-7 a few centimeters. When three or more receivers are deployed in the same area, they can combine their distance measurements to determine each tag's exact location to an accuracy of 10-15cm.

Of course, we've reported beacon-based indoor location positioning before, including a very high-accuracy system based on Bluetooth Low Energy (BLE) from Quuppa. Other companies with custom BLE technology include SK Telecom and WiseSec (more soon on the company that developed the technology in SK Telecom's system), and companies that have added BLE beacons to their existing Wi-Fi or sensor fusion solutions include PoleStar, SenionLab, Insiteo and others. Most of these BLE-based systems have the advantage of running on today's smartphones and tablets, although Quuppa's highest-accuracy system is also waiting for chipset changes.

But industrial deployments are only the beginning. DecaWave is reportedly in talks with network and device makers about including their chips in Wi-Fi access points, smartphones, tablets and more. Just imagine your phone knowing not only that you're in the supermarket, and not only that you're in the snack section, but that you're standing in front of the Ruffles and not the Lays. If indoor location positioning with 10cm accuracy were available in a wide variety of indoor locations, what kinds of novel location-based applications would come next?